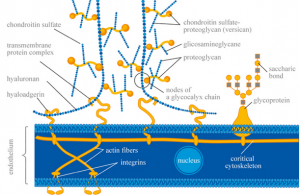 GAGs are characterized by distinct disaccharide unit repeats that give rise to different components such as heparan sulfate (HS), chondroitin sulfate (CS), and hyaluronic acid (HA), which are commonly associated with endothelial cells (ECs). Of these GAGs, heparan sulfate is the dominant constituent. The functions of the GCX is very dependent on the concentration and organization of  GAGs.

Apart from proteoglycans, which serve as the backbone structure on which GAGs are connected, glycoproteins are also considered backbone structures that ensure the stability of the GCX. Endothelial GCX glycoproteins and glycosaminoglycans are involved in many important cellular functions. Specifically, glycoproteins, of which the glycocalyx has several hundred, are involved in cell-to-cell and cell-to-substratum adhesion, cell recognition, membrane transport, hormone reception, and various enzymatic activities. Experimentally, lectins, proteins of plant origin, are often used to visualize glycoproteins due to their ability to recognize specific carbohydrate moieties.

The endothelial glycocalyx has multiple functions, of which, many play important roles in preventing the development of vascular diseases. One of these roles is to act as a barrier of transvascular transport, providing selective permeability between the lumen and the blood vessel walls. Under healthy conditions, the glycocalyx prevents transport of specific molecules into the blood vessel wall. Whether or not a specific molecule will be able to successfully penetrate the glycocalyx depends on various factors including size and electrostatic charge, as the glycocalyx has a net negative charge.

In addition to providing selective permeability, the glycocalyx also plays a role in blood cell-vessel interactions, including preventing the excessive adhesion of certain molecules. Research has shown that when the glycocalyx is degraded, molecules such as platelets and leukocytes adhere to the endothelium at higher rates. Despite the glycocalyx’s role in preventing adhesion, it also provides a structure for many plasma-derived molecules to dock, facilitating further interactions and signaling.

The glycocalyx also serves as a mechanotransducer by converting mechanical shear stress into biochemical signals. Doing so has an affect on both the morphology and function of the underlying endothelial cells. For example, under flow conditions, the glycocalyx has been shown to affect cell alignment and assist in the reorganization of the actin cytoskeleton. The glycocalyx has also been shown to play a flow depend role in the release of nitric oxide, which serves as a vasodilator and has also been implicated as a potential initiator of atherosclerosis.

As previously mentioned, the glycocalyx has been associated with a variety of vascular diseases and may play an important role in preventing the development of these disease. In atherosclerosis, disturbed flow caused by the geometry of blood vessels may degrade the glycocalyx, leading to enhanced adhesion of atherosclerosis related molecules and eventual plaque development. The glycocalyx has also been shown to be involved in diabetes and microvascular disfunction following ischemia/reperfusion. Our lab hopes to further demonstrate the involvement of the glycocalyx in the development of vascular diseases to assist in the advancement of therapeutic strategies that target these diseases.